This boot comparison was done in partnership with Backcountry K9. They provided Ruffwear Summit Trex, Hurtta Outbacks, and Ultrapaws Durable for us to test and compare, and we also tried out a set of Muttluks All Weather back in the summer. At the end of the test, we gave away all but our favorite pair. If you missed the boots test introduction and comparison table, check it out here. 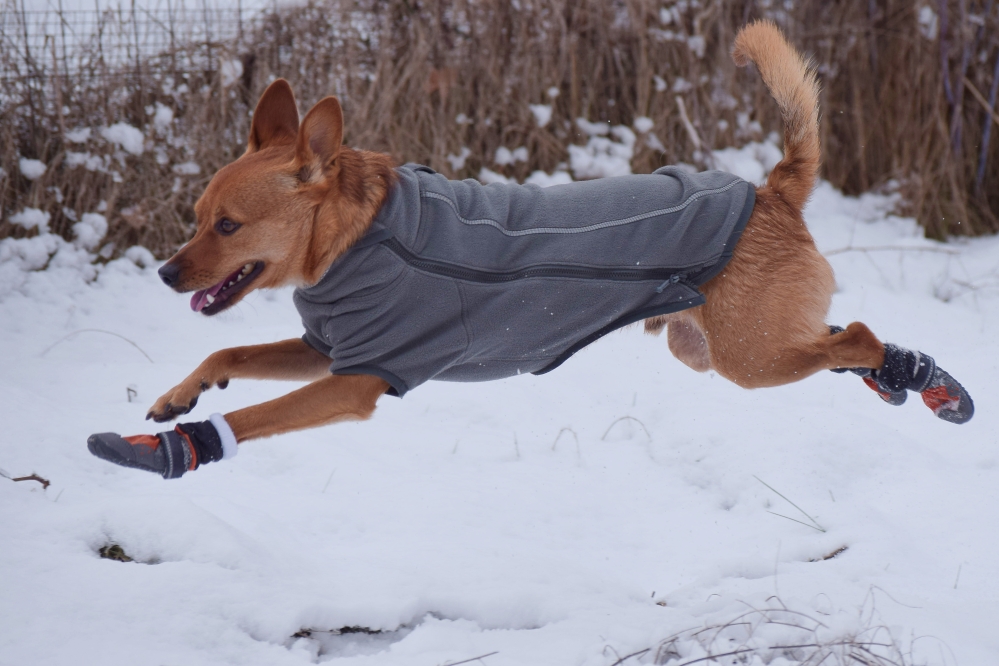 Ruffwear Summit Trex ended up working best for Robin (although they’re not perfect). Of the four, these or the Hurtta Outbacks will be the best boot for summer trail use, since they both have durable, grippy rubber soles and molded construction that can handle a lot of miles. The Summit Trex have the simplest design after the Muttluks All-Weather and are almost as easy to put on.

In this review, I’ll be making a lot of comparisons to the Hurtta Outbacks, since they’re the most similar out of the lineup, but I’ll also mention features of the Muttluks and Ultrapaws where relevant.

Wondering about Summit Trex vs the new Grip Trex (available in all the same sizes? Jason from Backcountry K9 took this comparison photo. 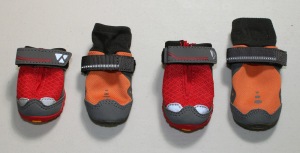 Ruffwear offers two lines of boots: the Summit Trex with a tall sock gaiter, and the low-height Grip Trex (prior to Spring 2016 release, not available in Robin’s size). The Summit Trex are a slightly lighter-duty boot without the Grip Trex Vibram soles, but are still plenty durable. A single boot weighs about 22g in the 1.5″ size. 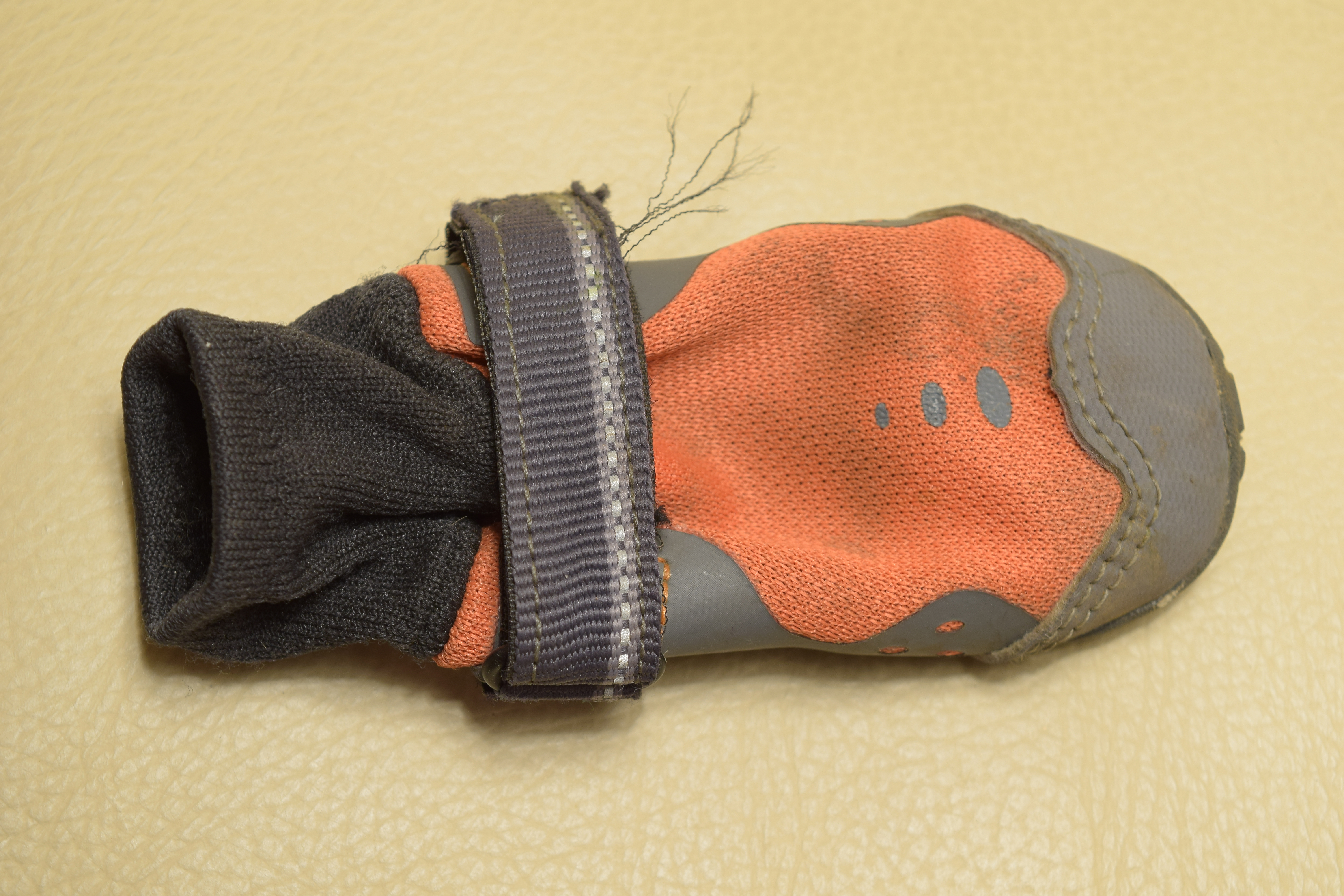 The boots have a simple, attractive design: a glued-on sole, sewn-on vinyl toe caps, a coated mesh upper, and a short gaiter. The sole is the stiffest of the four boots in this comparison, but also has the most tread. The sole extends upward under the ankle strap, forcing the boot into an oval shape when tightened around the ankle, which seems to take some pressure off Robin’s dewclaws but can make it harder to tell if the boots are cinched down. Ruffwear’s straps are the clear winner of the four- the hook and loop fasteners are sticky to the point that it’s sometimes hard to undo the straps. Unfortunately, reflectivity is minimal- just a single line of reflective thread on the ankle strap- so lost boots can be hard to locate at night.

The uppers are made of a tough, weather-resistant flexible orange mesh with a smooth inside coating. There are no rough edges or seams. It’s hard to tell how breathable they are, but they feel the lightest out of the four brands. Above the ankle strap is a sewn-on cuff made out of thin, stretchy knit. Unfortunately, the cuff is basically useless (at least on Robin)- it fits too loosely to seal out snow or sand, and the seam gets in the way when putting on the boots. I’d greatly prefer to see a fitted, ribbed cuff like the Muttluks use. 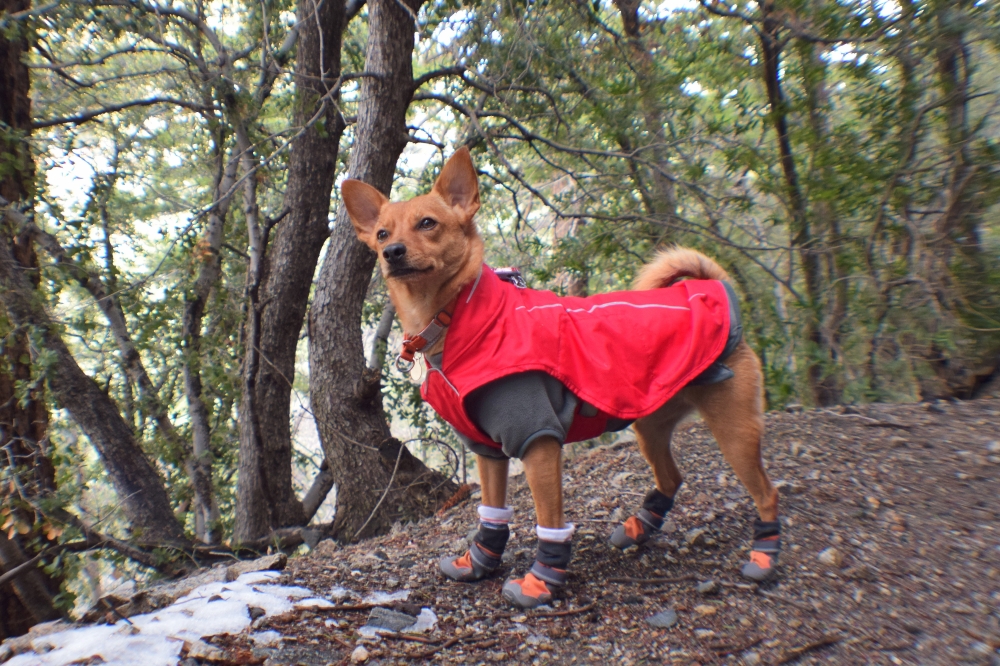 The Summit Trex fit Robin the best out of the four. Ruffwear uses 0.25″ size increments while the other brands do 0.5″ or more, so small dogs especially have a good chance of getting a close fit with Summit Trex (on larger feet, a little play in sizing will have less impact). Robin’s front feet are 1.75″ and his back feet measured at 1.25″; he’s wearing 1.75″ and 1.5″ boots. Despite the 0.25″ difference on the back feet, those boots fit well, and leave room for him to splay out his toes on turns. He was much happier in molded style boots (like Hurtta and Ruffwear) than in the flat-construction boots like Ultrapaws and Muttluks, possibly because the flat boots were bulkier and paddle-shaped. 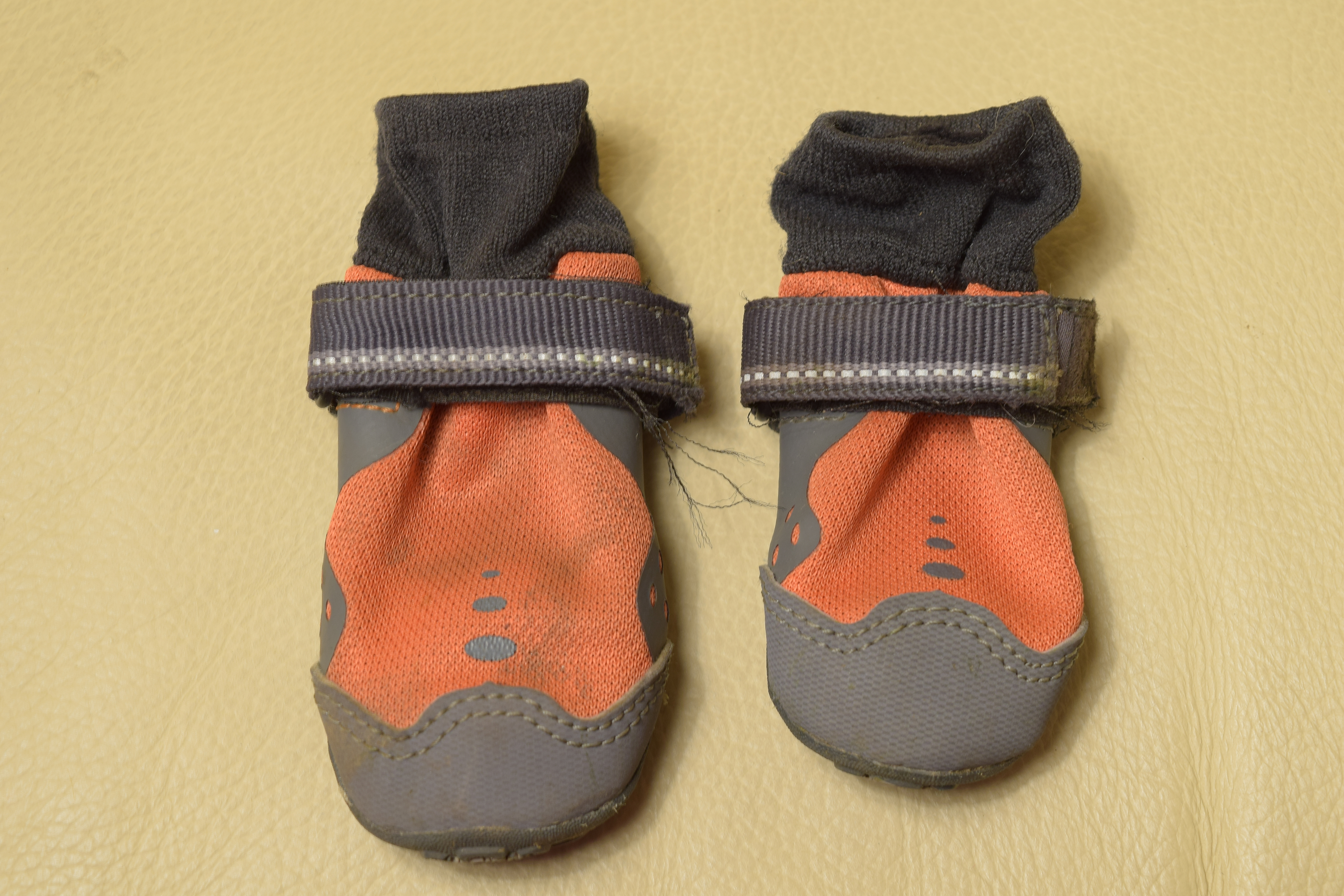 These boots didn’t stay on the “best”, but only because Robin turns into a breakneck speed racer when wearing them. He tears down the trail and leaps for sticks with reckless abandon. Consequently, he throws his front boots fairly regularly until his energy settles a bit. (He’s only thrown a back boot once over the past three months, when trying to scramble up a loose dirt slope.) Other boots (the Muttluks and Ultrapaws) stayed on better, but he was unwilling to do any running or jumping in them.

Robin has thin fur on his feet and is very blister-prone on the front paws. The Summit Trex caused slightly fewer blisters than the Hurttas, for two reasons- one, the extended sole forces the boot into an oval shape at the ankle, taking some pressure off the dewclaws; two, the front boots were his size. A proper fit is crucial for avoiding abrasions.

Trail: For three-season use on the trail, these boots or the Hurttas will be your best bet. These have lighter, more breathable uppers and slightly more grip, but they’re also less flexible (larger, heavier dogs probably won’t notice) and the cuffs do nothing to seal out dirt. Robin only struggled with grip on steep, loose slopes. For standard trails, these boots should have plenty of grip. Always be aware that dogs are clumsier in boots, so be cautious on trails with drop-offs.

Snow: Robin might have slimmer ankles than other dogs, but the cuffs on these boots don’t even come close to sealing out snow. The ankle straps and water resistant uppers did protect the paws, but his ankles were wrapped in snowballs. For use in deep snow, try Ultrapaws, because the two-strap setup seals out snow perfectly. For mixed use where grip is necessary, Hurttas or possibly Muttluks would do better. I’m planning to take in Robin’s cuffs and see if that helps. 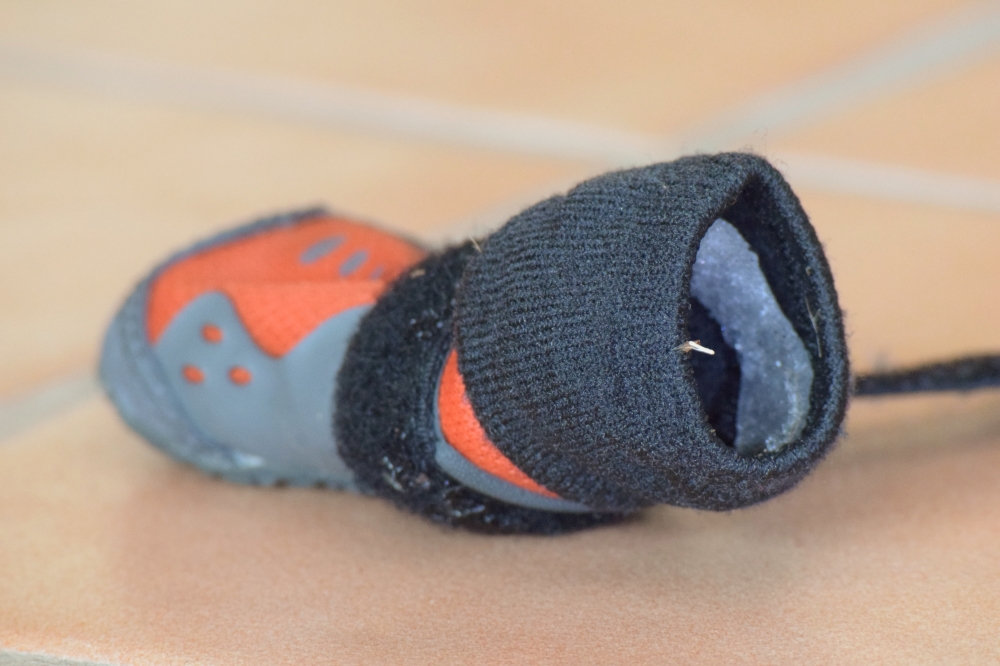 Street: These boots are great for the street and sidewalk. The rubber soles are very durable, and offer plenty of insulation from hot pavement or ice/salt. You might get funny looks- the hard soles make your dog sound like a little horse!

Indoors: The Summit Trex are designed for the trail, so they’re overkill for indoor use, but they’d definitely provide all the grip you could possibly want for older dogs or slippery hardwoods. They’re on the loud side, so Hurttas (with a more flexible sole) or Ultrapaws might be a quieter but still grippy option. 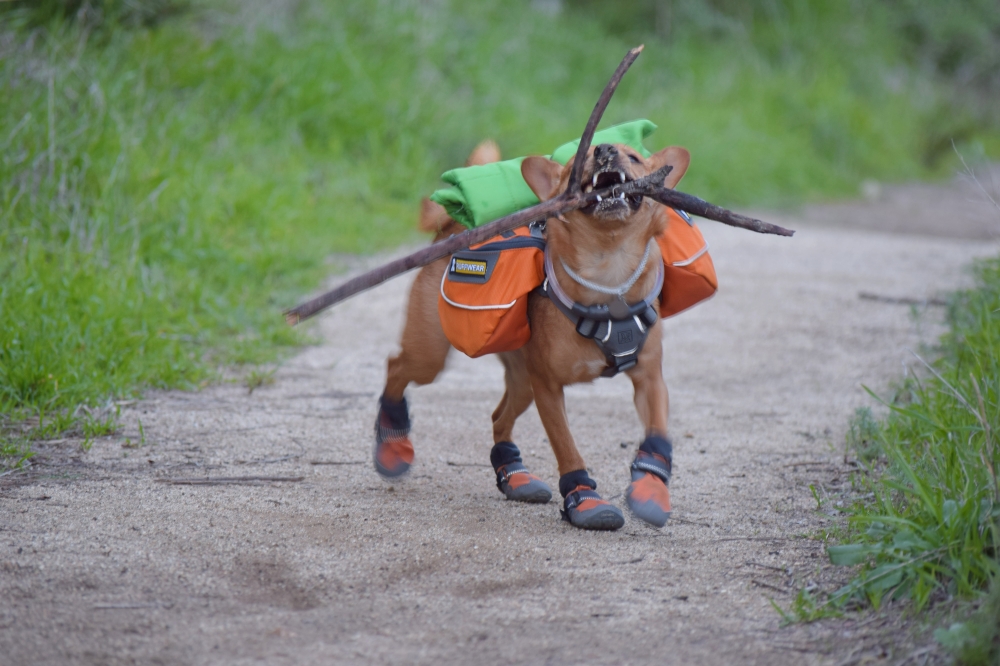 These boots saw the hardest use and still look pretty new (though very dirty). The stitching, uppers, cuffs, and soles look brand new underneath the dirt. The only visible wear is to the straps, which grind against the ground as the boots work themselves off. There’s a small bald patch on the backs of the two front boots, and the edges of the hook and loop fasteners have started to fray. Even so, they have plenty of stickiness left and are still hard enough to undo at the end of a hike.

These are durable, well-designed boots that give Robin plenty of grip on most trails. Because we live in a warm climate and don’t spend much time in the snow, the lightweight upper is ideal for Robin, and most importantly- he loves them! Once they’re on, he goes from high energy to crazy, running and skidding and jumping. I’m willing to put up with a thrown boot here and there to see him enjoy having protected feet.

Not ideal for: Deep snow and deep sand